At long last, Zoroastrian Death Music returns. We are pleased to announce that Eisenwald will be releasing Dakhma’s forthcoming full-length album, “Blessings of Amurdad”. 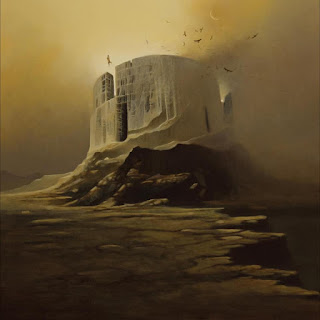 To be released November 19th, in various formats, you can expect to see:
Ltd. Digipak CD
Ltd. Tape (2 colors)
180g LP black vinyl (later)
Album Download
Stream
Pre-Save, Pre-Order & stream
Vinyl is in the works but will only see a release in 2022.
“I will speak of that which (he), the Holiest declared to me as the word that is best for mortals to obey; while he said: "they who for my sake render him obedience, shall all attain unto Welfare and Immortality by the actions of the Good Spirit.”
– 45/5 Ushtavaiti Gatha 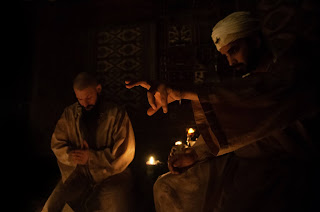 On “Blessings of Amurdad” (Amurdad translating to immortality in Middle Persian), Dakhma abducts listeners to a distant, foreign land and dares to journey to a time long ago, when desert mystics and noble empires still strode proudly through ancient Persia. Thematically, “Blessings of Amurdad” explores the complex relationship between mortality and immortality in Zoroastrianism, based mainly on key passages of the ancient text of the Gathas. In particular, the band manages to provide a compelling narrative detailing perceived jealousies expressed by mortals towards the divine and vice versa. These themes are captured in the compelling cover artwork, painted by the inimitable Babar Moghal, depicting an ancient tower of silence, seemingly forgotten and decaying but nevertheless exuding a sense of foreboding and nobility, hinting at the divine.
Musically, Dakhma manage to expand on the harrowing, sinister atmosphere presented on previous works and infuse it with a strong feel for dynamics and rhythm. On “Blessings of Amurdad”, Dakhma shows a significant development in their ability to craft compelling songs, whilst further improving upon the gripping, middle eastern infused atmosphere that has characterized their sound up to this point. A drastic improvement in production, allowing for impressive clarity where other contemporary extreme metal projects settle for a stale mess of noise, provides these carefully developed songs with the appropriate sonic vehicle to fully absorb the listener and transfer them to the ominous desert landscape displayed on the album’s cover artwork.
Throughout the album, Karapan Darvish’s performance of various acoustic instrumentation provides for an organic contrast to the already lush and diverse sonic texture on display. Despite the new sonic textures explored on “Blessings of Amurdad”, what allows this album to truly elevate from the masses is the band’s diverse, occasionally experimental and deceptively catchy songwriting style, something that has been honed and developed upon greatly in comparison to previous releases. In particular, Ahu Spozgar’s drum and percussion performance showcases an incredible amount of detail, where each hit seems composed to enhance the sonic foundation laid by the guitars.
As pertains to production, the album was recorded and mixed by Karapan Darvish himself in the notorious "Crypt", which has been responsible for all notable works that have arisen from the midst of the Helvetic Underground Committee, with Greg Chandler handling mastering at Priory Recording Studios.
And so, dare imbibe from Dakhma’s sonic chalice of divinity and accept the “Blessings of Amurdad”, in conspiracy with Eisenwald...
Tracklisting:
1.The Stench of the Wretched (Forsake Him!) [09:03]
2.The Gaze of Ahura (The King) [04:43]
3.Atash Bahram [04:25]
4.The Cry of Filth (Agerept) [06:54]
5.Birth of Flesh (Nama Karana) [05:52]
6.Afrinagan [03:39]
7.Oath of Purity (Amahraspand) [07:57]
8.The Rite of Dominion (Shehrevar) [08:59]
created by H.U.C. um 4:07 AM No comments:

Throughout the existence of the Helvetic Underground Committee, the Crypt has served as a haven for a plethora of creative endeavors of individual members and affiliated entities. Some of these creations have taken shape and developed into individual entities affiliated with the Helvetic Underground Committee, whereas other, perhaps more opaque creations, have remained concealed, buried by time and dust and hidden from all not involved in the inner workings of our Crypt.

The most harrowing of these buried - but never forgotten - creations have now been curated and assembled by the Helvetic Underground Committee to be unveiled in the form of a special release, entitled "Unearthing the Sinister". This collection of works ranges from a period of several years and contains creations from various individual members as well as obscure entities that, although discarded long ago, we deem to have produced audio that is worthy of being propagated. As such, the names of the entities and individuals who have created these works shall remain undisclosed, as these identities have lost any and all meaning for the material created. Rather, these works should be considered the organic creations of the Helvetic Underground Committee.
Certain titles for the individual tracks have been retained, insofar as the title must be viewed as a part of the work in order for it to retain cohesion. All other tracks remain untitled. You can stream the full compilation here:
These recordings are the raw creations of sinister minds, assembled and executed in conditions of varying duress and professionalism in the Crypt. They are to be experienced as such.
Available exclusively on tape through Temple Wolf Productions 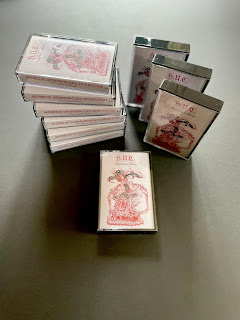 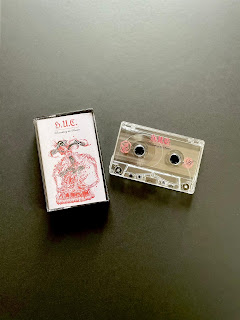 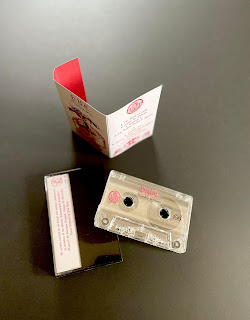 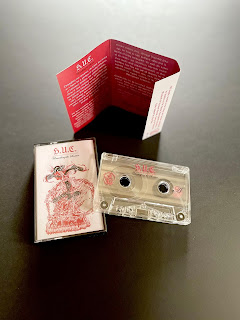 Artwork by Tim Wey.
Visual embodiment of the sinister by Dungeoncinth.
created by H.U.C. um 9:50 AM No comments:

A new era has dawned for Lykhaeon, necessitating some announcements. Most significantly, their next full-length album "Opprobrium" is set for release through Repose Records on July 21st. Some information on the concepts explored below:

On “Opprobrium”, Lykhaeon presents a stirring interpretation of a classic tale from Greek mythology, providing a musical and lyrical underpinning that allow this compelling story of desire, deception and the arrogance of immortals to sear through the listeners speakers and grasp them with an urgency rarely seen when delving into the selected source material. The musical scope of Opprobrium exceeds what is commonly exercised in modern extreme music to include unorthodox acoustic instrumentation and choir vocalisations that, albeit grand in presentation, are wholly necessary to appropriately convey the unfolding narrative.

“Chorus: Born of the light and the earth, pure succulent flesh, white limbs of desire, unsuspecting and gay, beware the temptation that groweth from the earth below thine feet.  For he is coming and his hunger is ravenous, his cunning great and his desire unshackled.”

When the lust of immortals becomes insatiable, it is frequently the realm of mortals that serves as the spring from which all desire can be quenched and any thirst satiated. Such is the fate of Persephone, who is - according to some tellings - the victim of a cruel ploy, a conspiracy incarnate, whereby her flesh is beset by the desire of the deity Hades. In his arrogance, appearing before her on a gilded chariot, treachery allows Hades to abduct the seed.

“Hades: My hands are the shrines of desolation, my breath reeks of ancient foul flesh, souls devoured by my ruinous splendor, abducting the seed!”

Lyrically, the tale of Persephone’s abduction by Hades and her eventual liberation, partially hindered by Hades’ final temptation, is composed in the form of a play, where the Chorus serves as an expository narrator alongside the characters of Hades, Zeus and Persephone. Each of the seven tracks on the album encompasses a short act, or rather a significant sequence of events driving the plot.

“Chorus: The whorish arrogance of immortals feeds the corruption of their flesh; For they know naught but desire and the pursuit of all indulgence.”

Lykhaeon was exhumed from its vermin infested crypt in 2013 and is affiliated with the Helvetic Underground Committee. This is the first - and thus far only - release that sounds how Lykhaeon should sound. 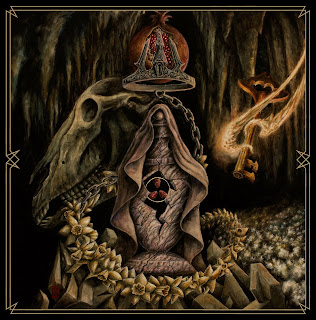 Rejoice, followers of alpine audio torment! The time has come to announce the details of the third Ungfell album. This concept album is called "Es grauet" and will be released on April 30th in various formats via Eisenwald. The glorious cover and the illustrations contained in the release were painted by the great Robbie C. Ward. 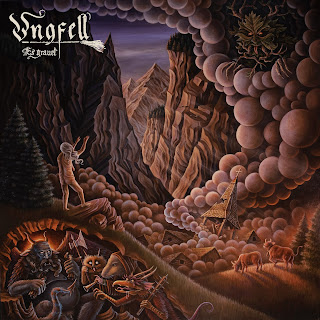 On their third full-length album, "Es grauet", Ungfell abducts the listeners on a sonic journey detailing moral ambivalence and treachery. Set in a seemingly idyllic rural village in pre-modern times, all is not as it seems. Tragedy strikes the town in the form of a horrific, grisly murder. Unfounded accusations lead the town further astray, while these occurrences of debauchery exceed the comprehension of the local inhabitants. Alas, evil lurks where you may least expect it... The story unfolds, accompanied by ravaging riffs and gripping songwriting that appropriately underline the complex, yet harrowing narrative. "Es grauet" shows Ungfell at their most ambitious and most audacious, featuring incredibly dynamic and warm production values, emphasizing atmosphere even more than previous releases and managing to compliment the story being told.

Follow Ungfell and "Es grauet" here. Information on pre-sale for LP and CD versions will be shared closer to the release date.

We are eager to present the latest creation by the forsaken woodland dwellers Urgeist, an image and audio amalgamation entitled "Weltenflucht". "Weltenflucht" was previously exhibited in Vienna for the event "Der Berg ruft zurück - zwischen Weltenflucht, Nationalerotik und politischem Aktivismus" on March 21st 2019. 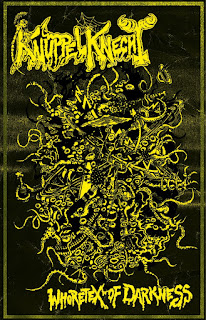 "Whoretex of Darkness", three tracks of pure audio filth to be unleashed in digital and cassette formats soon through Hexenkult.

On an unsuspecting early December evening in 2019, the decrepit woodland vagabonds of Urgeist descended upon the infamous Pöstli in Äugstertal, Switzerland. This fateful evening featured their first and only live performance, accompanied by Taifl, the sinister Basel natives with whom Urgeist had allied earlier in the year to release a split album full of harrowing tales of forlorn, vengeful spirits of yore.

Urgeist played several unreleased tracks on that evening, to the resounding delight of the perhaps somewhat surprised audience who didn't appear all too accustomed with the mystical craft being presented on stage. Watch their set in entirety here:


For the past few days, the glorious rays of total audio devastation emanating from Death. Void. Terror.'s sophomore full-length release have had the desired effect and contaminated plenty who have basked in the Great Monolith's purity. For those eager to delve into the heinous craft of these practitioners, "To The Great Monolith II" is still available from Repose Records, order here. 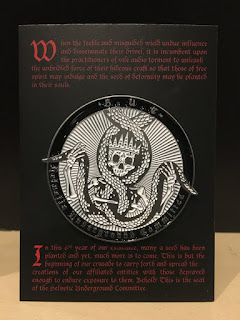 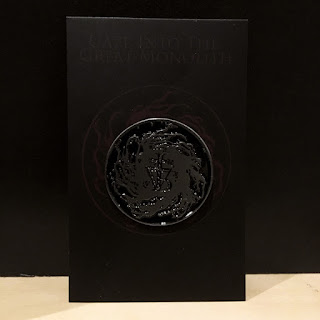 Cower in fear! A new decade of Helvetic Audio Torment.

A new decade is upon us, and with it we are eager to unveil a plethora of new music from our midst. Our crypt has vomited forth several worthy audio recordings in the past year alone, yet there is much more to come in due course.

In a time when too many have strayed from making worthwhile music and prioritize the portrayal of some lame self-image, we continue to set quality above any pretense of aggrandizement and categorically reject any notion of compromise in our pursuits. Our sounds will ring true to those who have ears to hear and shall speak for themselves.
created by H.U.C. um 1:08 AM No comments:

Urgeist has allied with the fiendish cohort known as Taifl from Basel to unleash a hideous, sinister split CD of music from times long past, when the wild was teeming with unknown, decrepit forces; roaming freely and still feared by simple folk. 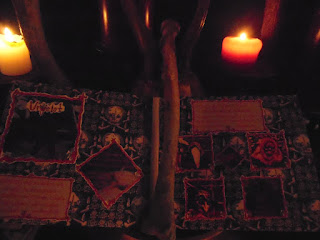 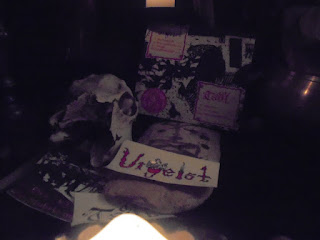 It should be noted that this release was created to commemorate the live performance of both Urgeist and Taifl at the "Pöstli Stubete" in Äugstertal, Switzerland, on December 7th, 2019.

H.U.C. is dedicated to the advancement of grotesque, vile, depraved and putrid audio torment originating from Switzerland.